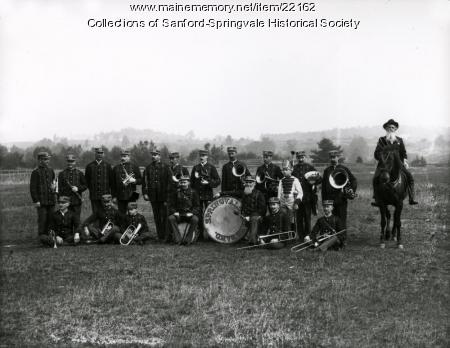 "The Springvale Brass Band was one of many that flourished locally before and after the Civil War. According to Emery's History of Sanford, a group called the Sanford Band was organized as early as 1844 and the Sanford Cornet Band started in 1860. Between the end of the Civil War and the close of the 19th century bands with the following names appeared in village parades and at local events: South Sanford Band, Weeman and Low's Quadrille Band, Mechanics Cornet Band, Sanford Drum Corps, Springvale Cornet Band, Springvale Band, Sanford Cadet Band and, of course, the Springvale Brass Band. The latter was the most photographed, perhaps because of its elaborate uniforms and dashing leader, R. A. Kempton, who always led the group on horseback." - "Villages on the Mousam, Sanford and Springvale" - by Harland Eastman