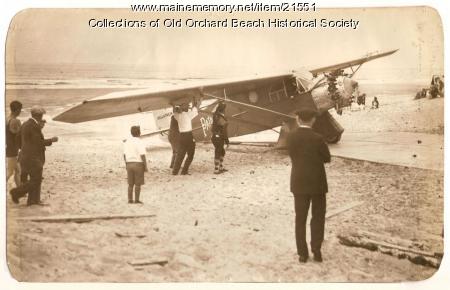 The Pathfinder, a Bellanca J, arriving at the hangar in Old Orchard from New York on July 2, 1929.

The crew of the Green Flash, which crashed at the beach during takeoff for a race with a French plane across the Atlantic to Spain, acquired The Pathfinder to make the transatlantic trip. Pilot Roger Q. Williams and navigator Lewis Yancey prepared the new plane at Old Orchard Beach and crossed the Atlantic on July 9, 1929, landing in Santander, Spain, then continuing to Rome.