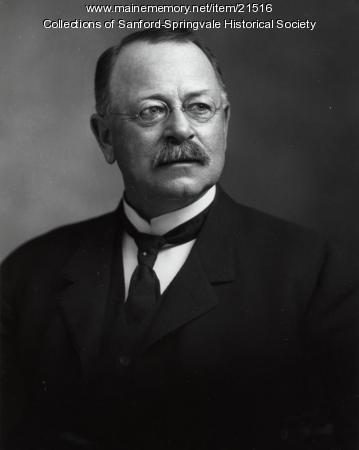 Ernest Montrose Goodall, was the youngest son of Thomas and Ruth Goodall. Born in Troy, New Hampshire on August 15, 1853 and came with his family to Sanford in 1867. When his father retired from the textile business he was promoted to president of the Sanford Mills. At the inception of the Sanford Light and Water Company in 1886 he was elected president, and on November 9, 1893, president of the Mousam River Railway Company. In 1897, the Sanford and Cape Porpoise Railway Company was built and Mr. Goodall was chosen president. Afterwards, the Atlantic Shore Line Railway Company was constructed, and he was elected president in 1898. He was made president of the Sanford Power Company, which was formed to furnish power by electricity to the mills in Sanford with the power house at Old Falls. He is also president of the Cape Porpoise Land Company, the Holyoke Plush Company of Holyoke, Mass., and the Oakdale Cemetery Association; and was also a director of the Goodall Worsted Company and Maine Alpaca Company. Mr. Goodall was a Sanford selectman, representative to the state Legislature and a state senator. Mr. Goodall spent many winters in Florida. He died in Miami, Florida, January 29, 1919 at age 65. He was buried in the family lot at Oakdale Cemetery in Sanford.