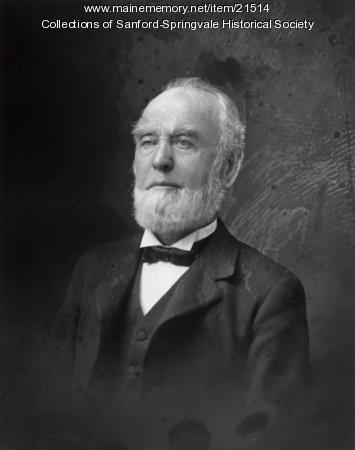 Thomas Goodall, was a textile industrialist in Sanford. He was born in Dewsbury, Yorkshire, England, September 1, 1832. He was orphaned at age three, and apprenticed in woolen manufacturing at age eleven. He was placed in charge of the establishment at age seventeen and came to the United States in 1846. After spending short periods in various places around New England, Mr. Goodall settled in Troy, New Hampshire where he first engaged in the manufacture of satinets and beavers. According to local historical accounts, one day Mr. Goodall observed a farmer struggling to secure a blanket on a horse, when he realized there was a market opening for horse blankets. He produced bales of them for the Union Army. Mr. Goodall sold his business in Troy and returned to England with the intent of retiring. After just a few years he returned to the U.S. looking for new opportunities and settled in Sanford in October 1867. By the time Mr. Goodall passed away in 1910, Sanford's population had risen dramatically and the mills were producing some of the finest textiles in the world.