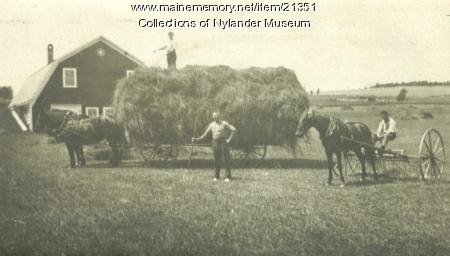 Hauling hay to the barn for storage. To the right is a dump rake. A dump rake was so called because after raking the hay for a short distance, a lever-operated mechanism raised the rake tines to "dump" the hay. The rake was pulled back and forth across a field and on each pass the hay was pulled into line with previously dumped piles making a windrow. After the field was raked into windrows, the dump rake was pulled down along a windrow dumping the hay into piles along the way. These piles were later loaded onto hay wagons and taken to storage.

This photograph is from samlat 13.