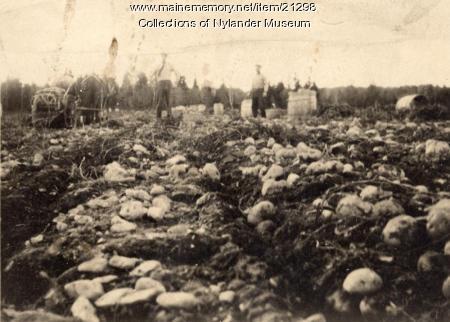 A Hoover paddle digger was used on this farm to partially mechanize the harvesting process. The one row Hoover Paddle Digger has paddles on the wheels. The turning of the wheels on the digger powers the digging mechanism. After the potato digger has uprooted the potatoes, the pickers follow along with baskets to collect the potatoes. When the basket is full it is dumped into a barrel. Each barrel is marked with a picker's ticket. The farmer collects the tickets and pays each picker according to the number of barrels each worker picked.