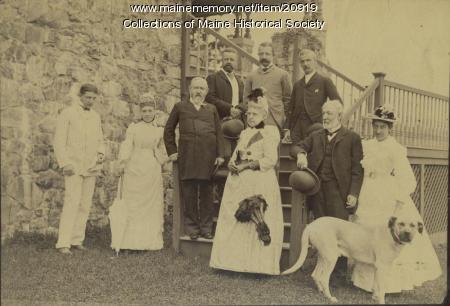 At the summer residence of politician James G. Blaine (1830-1893) in Bar Harbor are, front row, from left, James G. Blaine Jr., Mrs. Henry Cabot Lodge, President Benjamin Harrison, Harriet Stanwood Blaine, wife of James G. Blaine, who is next to her, and Harriet Blaine, their daughter.

In the back row, from left, are Henry Cabot Lodge, Walker Blaine, son of James Sr. and Harriet; and E.W. Halford, private secretary to President Harrison.