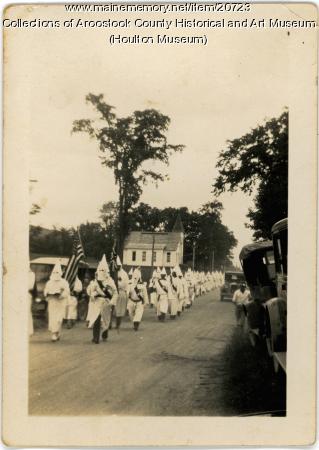 The first Ku Klux Klan faded from the South in the late 1870s and 1880s after the end of Reconstruction. A second Ku Klux Klan rose up from the Atlanta, Georgia area after World War I in response to fear of immigrants, radicalism and changing morals as well as hostility toward Roman Catholics, Jews, African Americans, bootleggers and divorcees.

By the 1930's the Maine Klan fell apart as quickly as it grew with numerous scandals of financial mismanagement, bootlegging and the fact that the Maine people did not care for the ultimate hate campaigns once they became clear.