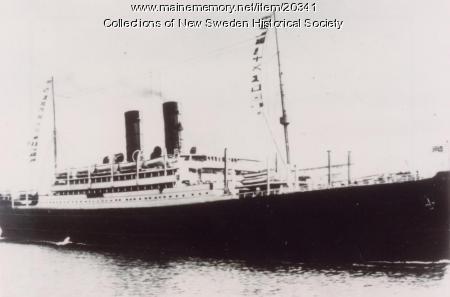 The Aroostook County Swedish Colony settlers endured hardships on their crossing of the Atlantic to reach their new homes. The Aurania, a Cunard steamship, brought Lars Petter Storm, his wife, Wilhelmina Karolina [Lätt] Storm and their sons; three year old Lars Anton and nine month old Carl Henning across the Atlantic. On July 6, 1888, just as the original settlers of New Sweden had done eighteen years earlier, the Storm family boarded the SS Orlando at Göteborg, Sweden, for the 48 hour voyage to Hull on Great Britains east coast. From Hull they traveled by train across England to Liverpool. On July 14 the Storm family boarded the Aurania and arrived in New York harbor on July 23 during a severe storm. They disembarked the next day.