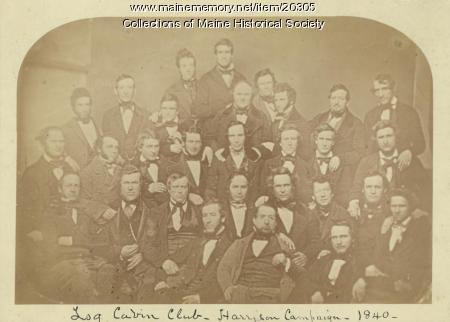 The Log Cabin and Hard Cider Club took its name from a campaign phrase used by Whig candidate William Henry Harrison in 1840. Because Harrison's campaign sought to appeal to non-elite voters, they stressed that Harrison was content to live in a log cabin and drink hard cider.

On the back of the photograph is written, "This picture was taken as a copy from a very old Daguerreotype. These gentlemen, whose faces you see on the reverse side, composed, and were members of the "Log Cabin Club," "Harrison Campaign 1840."

"Their place of meeting was in the painting rooms of Wm. Capen, Sign and Fancy Painter, on Exchange Street -- left hand side going down from Middle Street."