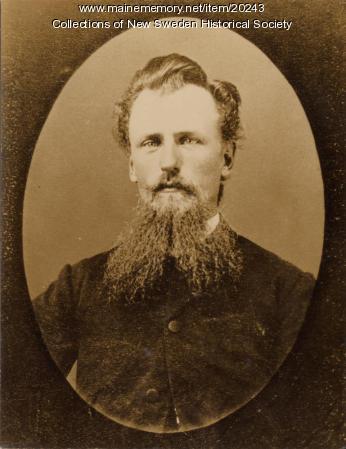 Andrew Wiren was the first pastor of the Lutheran Church in the Swedish Colony in New Sweden. He also started the first school in the town.

The North Star, a newspaper published in Caribou, in the February 26, 1873 issue gave the following report about Rev. Andrew Wiren.:

"Pastor Wiren is now teaching school four days a week in that part of New Sweden known as New Jemtland, about six miles from the Capitol Building. Teams are so scarce in the (Swedish) Colony, and the traveling by horse so little, that it is impossible to keep the roads broken (clear of snow) between the Capitol and New Jemtland, so that all going to and fro between the two parts of the settlement is done on Swedish 'snow shoes.'

"Pastor Wiren takes a ride on these long and narrow runners every Monday morning to New Jemtland where he instructs the children four days, then returning Thursday evening, he teaches the children that assemble at the Capitol on Friday to keep them from forgetting what they have previously learned."