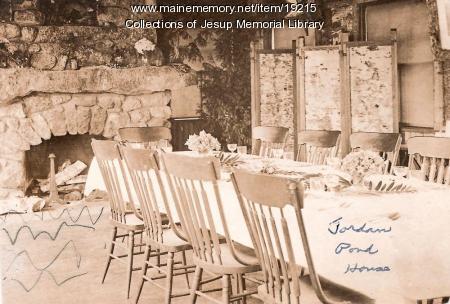 The Jordan Pond House traces its history from 1847. The first settlers conducted a logging operation. The original farm house was built by the Jordan family of Seal Harbor, for whom the pond and house were named.

The Jordan Pond House was founded as a restaurant by Mr. Melvan Tibbetts in the early 1870s. In 1895, Mr. and Mrs. Thomas McIntire began their association, which was to last over 50 years. They were responsible for the character and atmosphere of the original Jordan Pond House, with its birch bark dining rooms and massive field stone fireplaces.

Near the end of the McIntire's reign, Mr. John D. Rockefeller, Jr. purchased the property and gave it to the National Park Service to ensure its continuation. The Jordan Pond House has been operated by the Acadia Corporation, a small group of local people committed to preserving its traditions, since 1946.

On June 21, 1979, the original building was destroyed by fire. Through the efforts of the Island Foundation, private funds were contributed for a new Jordan Pond House.