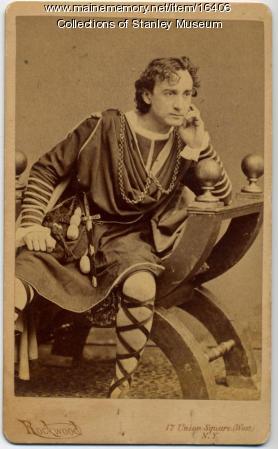 Edwin Thomas Booth (1833-1893), considered the most famous Shakespearean actor in the U.S. in the second half of the 19th century, is shown here in his signature role of Hamlet, circa 1870.

Edwin appeared at several prominent theaters, including Norombega Hall in Bangor and the Biddeford Opera House in Biddeford. A small, pocket-sized carte de visite of Edwin Booth as Hamlet, such as this one, might have been purchased as a memento at one of his performances.

Born and raised in a family of professional actors, Edwin Booth achieved the most theatrical renown of his kin. The family name was tarnished by his younger brother, John Wilkes Booth, who assassinated President Abraham Lincoln during a performance at Ford's Theater in 1865.