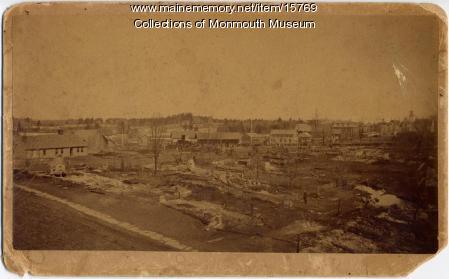 This photo was taken by professional photographer George F. McIntosh of Gardiner, the morning after the fire of April 19, 1888 devastated the entire downtown section of Monmouth, known as "Monmouth Center." No lives were lost.

The photo was taken from Maple Street, facing northwest toward Main Street, perhaps out of the upstairs window of the Blacksmith Shop.

On the far left is the Blossom House. The long building in the middle was the Train Depot that missed the fire by only 10 feet and 5 minutes.

The large white two-story building was the Grand Army Hall Block owned by Simon Clough. It burned in 1965.

The little building to the right of the G. A. Hall is the present-day Leones Restaurant. Up the street, the tall building with windows in its mansard roof is the Grange Hall.

The Methodist Episcopal Church stands at the far right. To its left, the building that looks like it has 2 chimneys, is Toad Hall.

Close-ups reveal amazing detail such as several people standing at the train station and the G. A. Hall, as well as individuals who appear to be contemplating their personal losses, a freight car on the tracks, a man in the foreground carrying two buckets, a man in a horse and buggy, and a little boy. Notice the snow in the background on the hills.