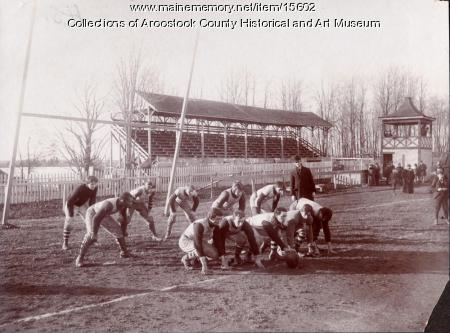 These eleven men made up the first football team to represent Houlton High School.

They are practicing in front of the grandstand at the Houlton fairgrounds.

Although their first game was played in 1900, with Principle Fred Burrill as a member of the squad, the following year the team was made up of all undergraduates of HHS.

The backfield was made up of, farthest left in the rear, George Burrill, right halfback, in front of Burrill, wearing a helmet, Murdoch B. McKay, fullback, Gus Clark, left halfback. Crouching behind the center is Arthur O. Putnam, quarterback.