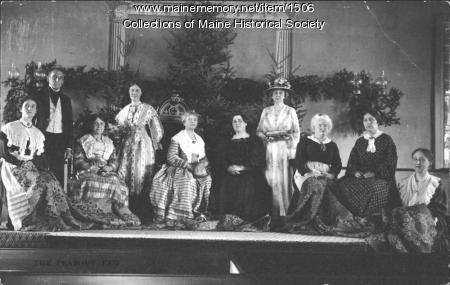 Kate Douglas Wiggin shown standing, third from left, with the cast of "The Peabody Pew," a play Wiggin wrote, at the Tory Hill Meeting House in Buxton.

The play is about a Dorcas Club that decides to raise money to refurbish their church, but when funding is wanting, chose to do the upholstery and cleaning of the pews themselves. In the picture the fabric that is depicted lies across the floor in front of the women. The work is hoped to be finished by Christmas.

With the exception of Mrs. Libby at the left, all these persons were members of the original cast when the play was first produced in August 1916.