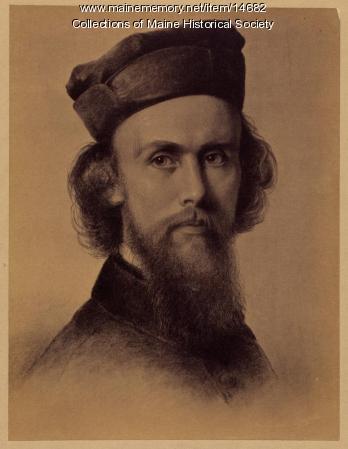 Benjamin Paul Akers was born in Westbrook in 1825. As a young man, he worked at his father's mill in Westbrook, making toys and turning wood. He attempted writing, drawing and painting, all with little success.

In 1849, Akers traveled to Boston to learn plaster casting. He worked in the medium for the rest of his life. In 1850, he opened a studio in Portland, and with the patronage of John Neal, his work quickly became popular.

He cast busts for many politicians and influential people in Maine and around the country, including the poet Henry Wadsworth Longfellow. His most famous sculpture, the Lost Pearl Diver, is now owned by the Portland Museum of Art. Akers traveled extensively through Italy, working and studying sculpture.

In 1860, Akers returned to Philadelphia to work, and soon became ill. He declined quickly and died in 1861. He is buried in Evergreen Cemetery in Portland.