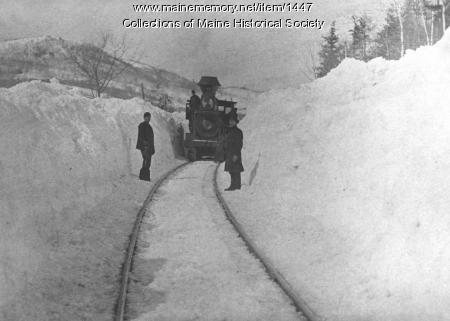 The tracks have been cleared after a heavy snowfall and this woodburning Portland Company engine is about to roll. Taken somewhere along the Rumford Falls and Buckfield Railroad Company line in the 1870s, this photograph shows one of the seasonal problems facing small railroads. Chartered in 1847, the Buckfield Branch Railroad had more than its share of reversals. Stretching from Mechanic Falls to Buckfield and on to Canton, it went through neglect and bankruptcy under various owners and names. Reorganized in 1874 as the R.F. & B. RR it resumed operation four years later. It finally reached Rumford Falls in 1892 and, in its later incarnation, played a major role in the industrialization of that place.