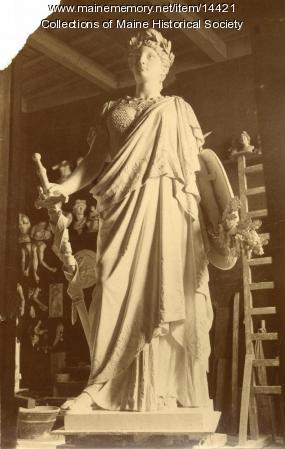 Sculptor Franklin Simmons was born in Lisbon, Maine, and raised in Bath. His skill for sculpting led to training in Boston and working in studios from Lewiston, Portland, and Washington DC to Rome, Italy where he moved permanently around 1870.

Simmons left his estate to the city of Portland, which hosts Simmon's public sculpture. The plaster model for "Our Lady of Victories" served as the inspiration for the bronze statue atop the Soldiers and Sailors Monument in Monument Square. Simmons also created the Henry Wadsworth Longfellow bronze statue in Longfellow Square.

This photo was taken at Franklin Simmons' art studio in Rome, Italy, about 1890.