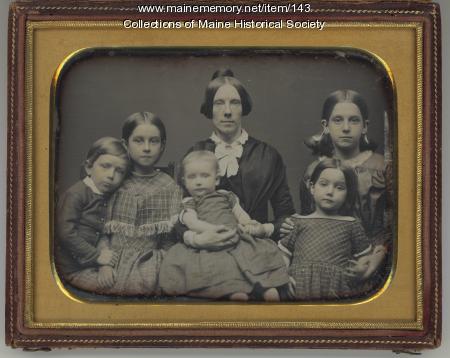 This half-plate daguerreotype shows a family portrait of Lucretia Day Sewall with five of her ten children, probably taken in Portland.

The children are, from left, Somers, Ellen, Abby, Lucretia and Eunice.

Kiah Bayley Sewall (1807-1865) and his wife, Lucretia Day Sewall (1813-1895), married in 1836. He lived in New York and she in Portland while he was trying to resolve debts from land speculation and was studying law. Their first child was born in Portland.

Finally, he set up a law practice in Mobile, where the other children were born. However, the rest of the family sometimes lived in Portland with the Days and several of the children went to school in Maine.

K.B. Sewall was in Mobile during much of the Civil War and died in Boston on his way back to Portland in 1865.