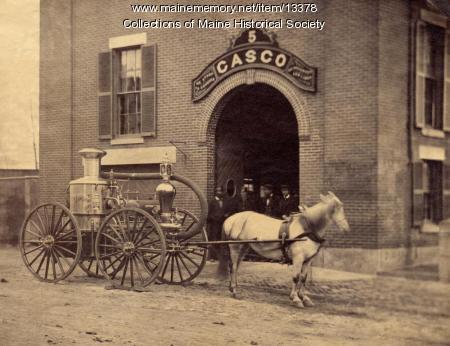 "A lone small horse pulls this early steam fire engine, the 'Greyhound,' marked as 'Portland No. 1,' in Portland, Maine, in 1864. The steamer was built by the Portland Company in 1860 for its own use and the use of the Grand Trunk Railroad next door, but it was loaned to the city of Portland until its 'Falmouth No. 2' was ready to be put in service. This photograph was taken on Congress Street at the head of Smith Street next to the Eastern Cemetery. The building was built as a schoolhouse, then in 1845 Ladder No. 1 and Engine No. 8 went on the first floor. In 1861, the
'Falmouth No. 2' was put into service here. Later, in 1864, 'Casco No. 5' made its home here, with the school continuing to be above it." --Fletcher, David H. "The Portland Company 1846-1982." Charleston, S.C.: Arcadia Pub., 2002. 91.