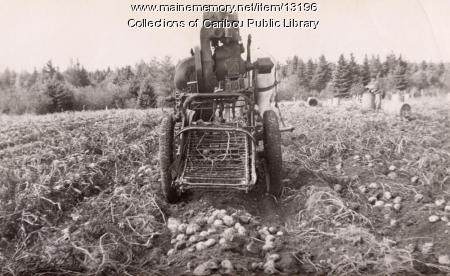 On the front of the digger a "... wide steel pointed shovel (point) was set to run at a safe depth below the potatoes in the row. It loosened the soil and by the horses hauling the digger at a slow walk, the whole row, including the potatoes, vines, rock and soil are carried onto the elevator. The elevator was a continuous steel lag chain moving toward the rear of the machine. The soft dirt dropped between the lags of the moving elevator, aided by the continuous up and down movement of the agitating sprockets bolted to the frame under the steel lags. The rocks, potatoes, vines, and large chunks of hard dirt were deposited on the top of the soil." George Whitneck, "A Farmer Lives in Maine."

The Gasoline engine on the digger opperated the mechanisms. Earlier versions of potato diggers were powered by the rotation of the digger's wheels.

The horses haul the digger with its shovel in the ground. The engine bolted on top of the frame furnished the power to run the elevator.