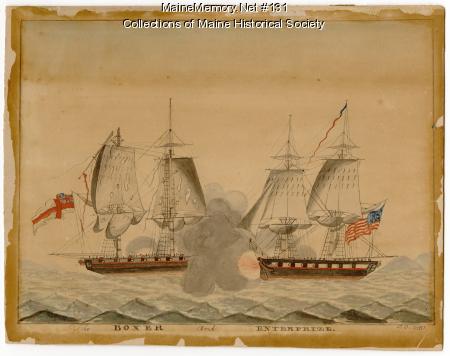 On September 5, 1813, the battle between the U.S. Brig Enterprise and the British Brig Boxer took place in the waters off Monhegan Island, Maine.

The Boxer's commander, Captain Samuel Blyth, 29 years of age, was killed in the opening exchange of cannon fire. On the Enterprise, Captain William Burrows, age 28, was mortally wounded a short time later.

Burrows would not consent to being carried below until the end of the engagement, after which he accepted the British surrender.

The painter, James Osborne (or Osborn) (ca. 1800-ca. 1840) opened a Portland studio about 1830. He produced watercolors of local family groups and historical scenes.