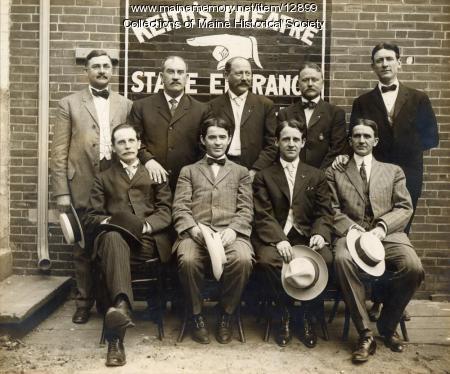 A group of musicians at the stage entrance of Keith's Theater on Congress Street in Portland. The Keith Theater was opened in 1908 on Preble Street. The owner of the theater, B.F. Keith, also owned theaters in Boston, Philadelphia, New York, Providence, Cleveland and Columbus.

The theater, which seated 1,800 people, cost $250,000 to build. The decorations and furniture were elaborate, and the theater was very modern for its time. Second-run films, vaudeville acts and stage productions were shown there.

In 1939, the stage changed owners and was renamed the Civic. The Civic operated until 1963, and the building was torn down in 1965.