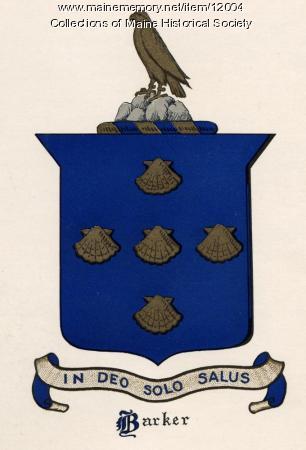 The Barker Coat of Arms from the book "Barker Genealogy" by Elizabeth Frye Barker, published by the Frye Publishing Company, NY, 1927. "This coat of arms was confirmed in England in 1278 by Edward I." The Barker's referred to in the genealogy are Robert Barker of Plymouth Colony, 1628, John Barker of Duxbury, Mass., 1628, James Barker of Rowley, Mass., 1637, James Barker of Rhode Island, 1634, Edward Barker of Branford, Conn., Richard Barker of Andover, Mass., Samuel Barker of Delaware.