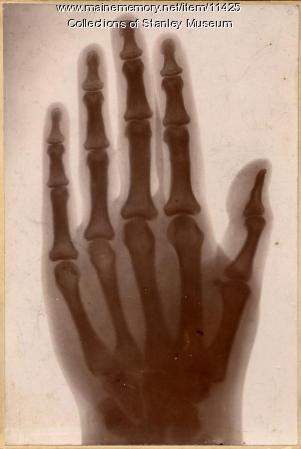 An early X-ray of the human hand, made by a Stanley Holtz X-ray machine, about 1896.

Brothers Francis E. and Freelan O. Stanley of Kingfield already had several patents and inventions on photographic processes to their credit when X-rays were discovered in 1895.

Fascinated by the new technology and astute in seeing the applications to their existing dry plate business, the Stanleys designed and built their own X-ray apparatus by the following year.

It is said that doctors at the Massachusetts General Hospital sent patients to Watertown, Mass., to the Stanley Dry Plate Company to have the first experimental X-ray photographs taken in the area.

The Stanley Dry Plate Co. continued to make X-ray equipment until the turn of the century when more advanced machines made their early equipment obsolete.