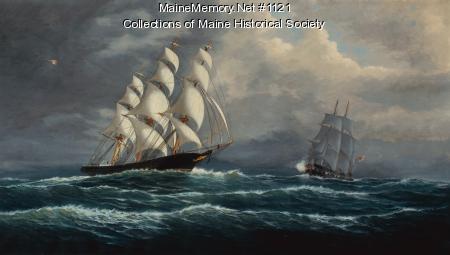 Franklin Stanwood (1852-1888), a self-taught painter and sailor from Portland, painted this large canvas of a slave ship escaping from a British cruiser.

The slave trade that supported the triangular trade market was outlawed in England in 1807, and in the United States in 1808. In 1820, the U.S. Congress further declared that anyone engaged in the international slave trade was guilty of piracy, but slavery on U.S. soil was legal until 1865. Though the penalty if convicted of slave trading on the sea was death, the potential profit, plus the high wages, meant there was never a shortage of people willing to risk their lives in this endeavor.