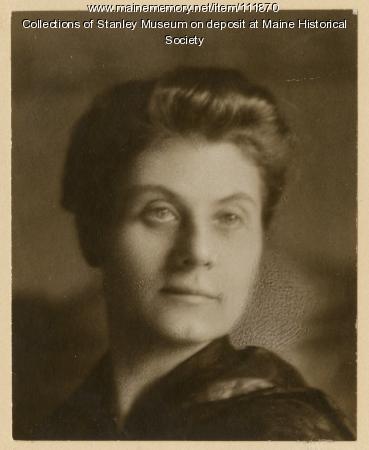 Chansonetta Stanley Emmons was born in rural Kingfield, Maine where she lived until she went to college. She studied education at the Western State Normal School in Farmington and in 1885 moved to the Boston region where she found work teaching drawing and sketching.

Emmons began working as a photographer at the age of thirty-nine, after the death of her husband. She studied with her brother, photographer FE Stanley who had a shop in Lewison-Auburn. Frustrated with the process of wet-plate technology, the Stanley twins created a dry plate photography process, which they patented in 1885. They later invented the Stanley Steamer automobile, the proceeds from the car allowed the Stanleys to financially support Chansonetta and her daughter, Dorothy.

This portrait, which Chansonetta titled, "Portrait of herself, by herself" is one of the first “selfies” made. Emmons used her reflection in a mirror to compose the image.