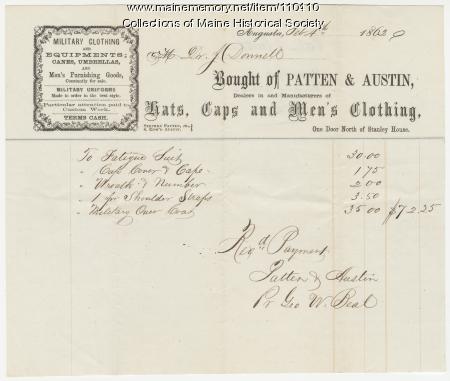 Patten & Austin's bill head lists "Military clothing and equipment; canes, umbrellas, and Men's furnishing hoods; constantly for sale." Additionally, it lists "Military uniforms made to order in the best style." On this occasion, Dr. Donnell specifically purchased a "Fatigue Suit" (military uniform), a cap cover and cape; wreath and number; one pair of shoulder straps; and a military overcoat, for a total of $72.25.

Dr. Donnell's frock coat is housed at Maine Historical Society, but its unclear if this is the same uniform he purchased from Patten & Austin.