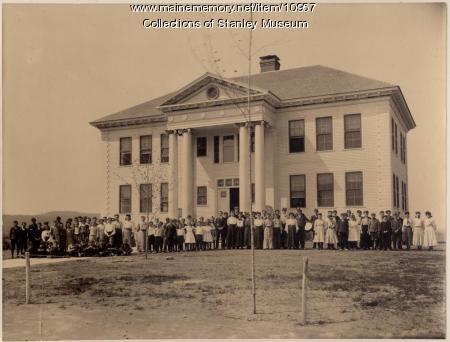 The Town of Kingfield began construction on a new schoolhouse in August 1903 and the school, then serving grades 1 through 12, opened the following year.

The interior was designed by the general contractor, Lavella A. Norton, who also served as the Superintendent of Schools. The exterior, particularly the portico around the entranceway, was designed by the Stanley twins, Freelan O. (F.O.) and Francis E. (F.E.) Stanley, who financed the additional construction and supported their hometown school in other ways.

The Stanley Brothers, the sons of former Kingfield schoolmaster Solomon Stanley 2nd, had themselves begun teaching careers at other rural Maine schools before making their fortunes in the Stanley Dry Plate business and the manufacture of Stanley steam cars.

Kingfield's schoolhouse debt was paid off by the townspeople over the next decade, but the special contributions of the Stanley Brothers were recognized in 1905 when the school was officially named the Stanley School.

Among the first class of 13 students to graduate from the Stanley School in 1906 was Agnes Lucille Stanley, the niece of the Stanley twins. In this photo taken around 1907 before the school's name was added over the entranceway can be seen another Stanley niece, Apphia Jane Stanley, wearing a dark dress with a white bow and buttons, about the 11th student in from the left. The tall woman to the left of the first ground floor window on the left is identified as Josephine Thompson, one of the teachers. To her left (right to left) are students: Bernice Hunt, Bernice Williamson, Hilda Huse, Apphia J. Stanley, and Gladys Gilman.