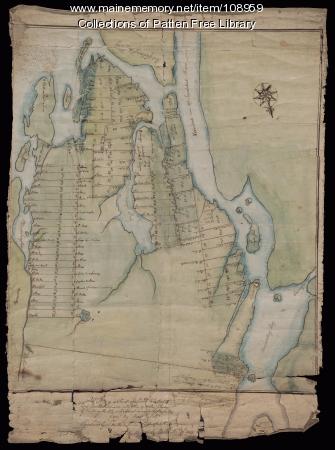 The layout of numerous parcels located in Woolwich from the Twings Ledge to Hockomock Point, including Back River, Nequasset Lake, Kennebec River, and Merrymeeting Bay were shown on this property map.

Some of the landmark points of property division were pointed out as "stones," "w pine," or "bunch of willows in swamp." Included are some representations of dwellings and named property owners.

Benjamin Johnson created the original 1740 map, which was copied by Henry Ingalls, and copied again in 1751 by an unidentified transcriber. Additional parcels were noted in the northern portion, dated 1757 and 1758.

The complete title block reads "A plat of a tract of land / laid out to Coll Edward Hutchinson and others by Mr. Benja Johnson by numbering the lotts with several remarks of houses &c ; coppyd by Henry Ingalls ; said land lyeth on the east side of Kennebeck River ; coppyd by Tho ... Boston Nov. 29, 1751."