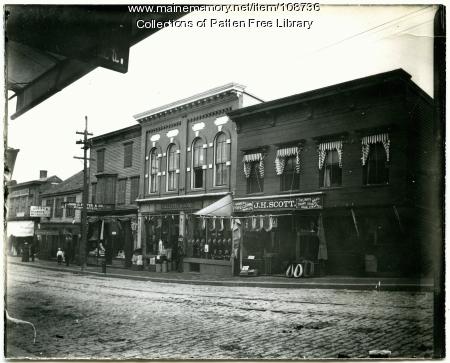 The facades of several downtown businesses on the east side of Front Street between Arch and Ferry Streets are featured. Shepard's Fish Market, with Colby's Seamen's Bethel above, were located at 151 Front Street. John D. Footer & Co. was a pharmacy located at 147 Front Street. John Klippel and Sons at 141-143 Front Street sold clothing, furnishings, boots, and shoes. James H. Scott sold harnesses at 139 Front Street after moving from 136 Front Street around 1897.
Products from some stores were on display on the sidewalk and in the windows. The trolley line was visible among the cobblestones.

Of the buildings pictured, John Klippel & Sons' store is the only building that remains standing as of 2021, commonly known as the brick store. Real estate taxes indicate that a brick building existed on this site as early as 1845. After the fire of 1866 the building was rebuilt or remodeled in the Italianate style. Morris Povich, a Jewish immigrant from Lithuania, bought the property from the heirs of John Klippel in 1919 and the Povich family operated a clothing store there until 1994. It was later home to Brick Store Antiques and Bath Brewing Company. In 2021, the building is known for the Morris S. Povich ghost sign on the south side.