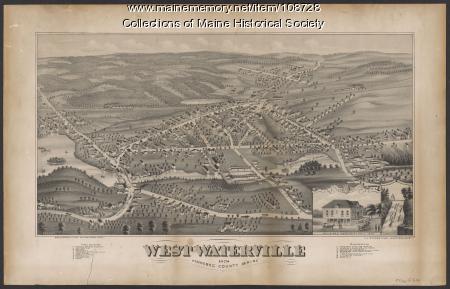 A bird's eye map of West Waterville, created by Beck & Pauli lithographers and published by J.J. Stoner of Madison, Wisconsin.

The lithograph highlights local interest sites including Baptist, Methodist, and Universalist churches, as well as hotels, halls, mills, schools and businesses. Small vignettes for the Soldiers Memorial Hall in 1870 and Cascade (waterfall) appear at the lower right. As with other Beck & Pauli lithographs of Maine towns, the railroad is a featured item. The "S.R.R" likely stands for Somerset Railroad.

West Waterville set off from Waterville and formed its own town in 1873. The town name was changed to Oakland ten years later.