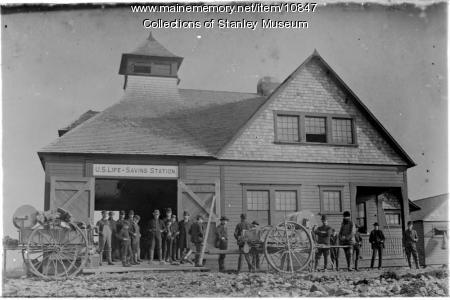 The Wallis Sands Life-Saving Station was the northernmost station on the New Hampshire coast, located 1 3/4 miles south of Odiornes Point, guarding the southside entrance to Portsmouth Harbor. Built in 1890 and deactivated in 1938, it was one of 15 stations of the US Life-Saving Service located along the Maine and New Hampshire coast.

The US Life-Saving Service grew out of a network of coast watching stations established to provide assistance and shore rescue to disabled ships in the mid-19th century, but did not become formally established until 1871, when it came under the direction of Sumner Increase Kimball (1834-1923) of Lebanon, Maine.

Kimball reorganized the service, built many new stations with up-to-date equipment, established rigorous training and certification programs for stationmasters and surfmen, and set high standards for the Life-Saving Service. He continued to serve as the Director of the U.S. Life-Saving Service until it was absorbed by the U.S. Coast Guard in 1915.

The station is here viewed from its inland side, the Wallis Sands beach to the rear. Two beach carts loaded with life-saving apparatus stand before the station.

On the right side of the platform before the open surfboat bay can be seen a Lyle gun, a small brass cannon used to shoot life lines to disabled vessels offshore. Crews of life-saving stations were normally made up of six surfmen (sometimes seven in winter); the large group of men in this photo suggests that there may be several crews present, possibly gathered together from nearby stations to take part in joint drills.