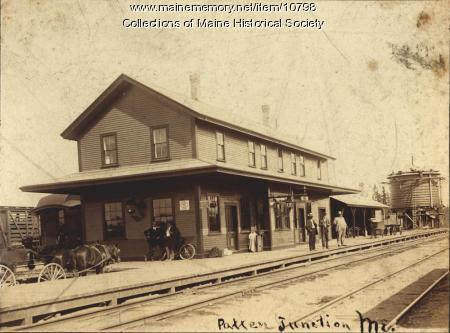 Men on the platform at the Patten Junction railroad station await arrival of a train.

The Patten Junction depot was originally a part of the Patten & Sherman Railroad, which was built from 1895 to 1896. This branch line was financed independently by Albert Burleigh. The Patten & Sherman Railroad was eventually absorbed by the Bangor & Aroostook steam line, which was built in order to address the shortage of railroads in Northern Maine, both for travel and shipment of goods.

The event of faster, more efficient travel was detrimental to the railroads in Maine and across the country, and many rails and depots were abandoned in the twentieth century. The Patten Junction depot was retired in 1968.