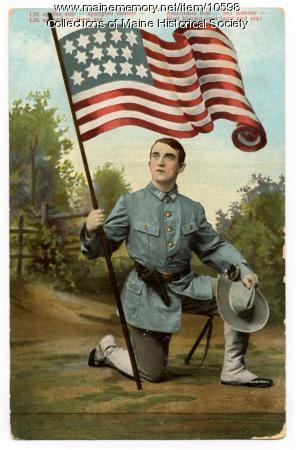 This postcard has the following text, "Lift up the star spangled banner, lift up and let them see,
Americans true-fair manner, Well known over land and sea! "

The message on the back of the card is to O.E. Cushman of St. Johnsbury, Vermont, from Lawrence Johnson of Marshfield, Vermont, Feb. 23, 1910.

The flag on the postcard has 14 stars, which never was an official American flag. The flag adopted on May 1, 1795, had 15 stars and stripes. Vermont was the 14th state and the artist may have been depicting its inclusion among the original 13 states.