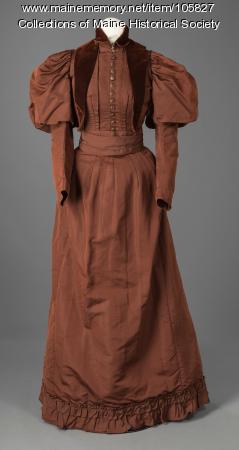 Harriet York (1864-1955), originally from New Hampshire, married Dr. Walter D. Williamson at Milan, NH in 1889. This copper colored two-piece grosgrain silk, cotton and velvet dress is said to be from Mrs. Williamson's wedding trousseau, a trousseau being items worn during, or collected by a new bride for the early part of her marriage. Dr. and Mrs. Williamson eventually moved to Portland, where Dr. Williamson was a surgeon at Maine General Hospital and served as president of Maine Medical Association.

While associated with Helen Williamson's late 1880s trousseau, the sleeve style is more indicative of mid-1890s trends. There are other marks of alterations or updates, such as evidence past buttons on the left side. The dress was likely updated by Mrs. Williamson to reflect the trendy puffed "leg of mutton" sleeve style, which saw a brief comeback starting around 1893.