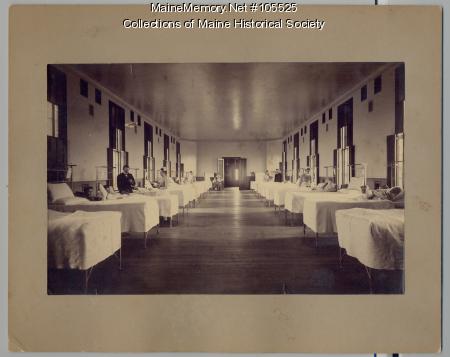 Superintendent of Nursing, Amelia Smith, at the far right, cared for patients in the women's ward at Maine General Hospital with Dr. Allston Hunt, pictured next to Smith.

Maine General Hospital's 19th century patients enjoyed few physical comforts and little privacy. Heavy iron bed were lined up in two facing rows, 20 to a ward. Ample light poured through the spacious windows and flowers were allowed in the women's ward. Visiting hours were restricted to one hour a day, except Sunday. Female patients couldn't have male visitors outside of their immediate families and in theory, each patient was allowed only one visitor at a time, but this rule frequently wasn't enforced.

Anyone wishing to be admitted to the hospital could apply to the resident physician, Dr. Hunt, in person, by request from a friend if too sick to travel, occasionally by a home visit, or in writing if the patient lived out of town. Although Maine General admitting committee accepted almost everyone who applied, patients with incurable or chronic illnesses were refused, as well as refused admission to people with highly contagious diseases.

Patients unable to pay for their hospital stay could occupy a hospital bed free for up to three months from members of the public who would sponsor free bed, the use of which would be theirs for a year and otherwise offered to those in need.