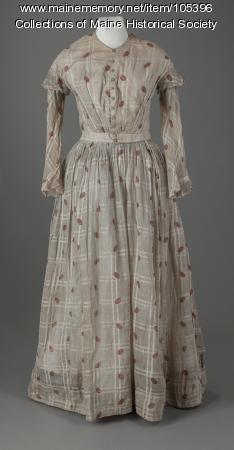 In the 1850s, cotton became more widely available, and was fashioned into stylish women's dresses. The fabric is patterned with connected amoeba and oval shapes on a plaid background. The popularity of plaid grew during Queen Victoria's reign due to her interest in the countryside, and a particularly romantic view of Scotland.

It's likely that the woman who wore this dress used petticoats, layers of underclothes, and a corset and pantalettes underneath, for both style and modesty's sake.

While born too late to have actually worn it, Mildred Merrill Howe, of Portland and Sommerville, Massachusetts is associated with the dress. It likely belonged to one of her relatives.