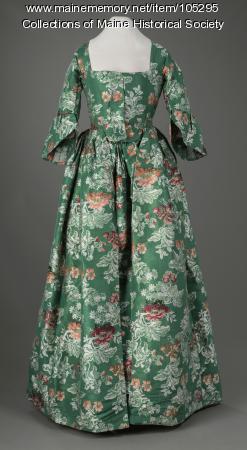 A member of the Jewett family wore this green, brocade silk dress to an 1825 ball in Portland, in honor of Revolutionary War hero, the Marquis de Lafayette. According to "Agreeable Situations" published by the Brick Store Museum (1987), "the ball may have been a reception at Daniel Cobb's house or a social call Lafayette made on Portland ladies at the Ebenezer Thatcher residence."

The dress embodies a wide swath of American history. The fabric dates between 1735-1742 during the Colonial period. The dress itself was constructed in the 1770s around the time of the Revolutionary War. By 1825, the dress was altered and re-constructed, perhaps as a costume (known at the time as "fancy dress") in homage to the Marquis, or an early example of the colonial revival movement.

An "open gown," this was probably once a robe à l'anglaise or robe à la française. The front of the dress opens to expose the underskirt, which is made of the same fabric. Alterations are found throughout the dress, including a newer, white cotton waistband. The seams across the shoulders were altered at some point, and the skirt was hemmed to make the dress shorter.