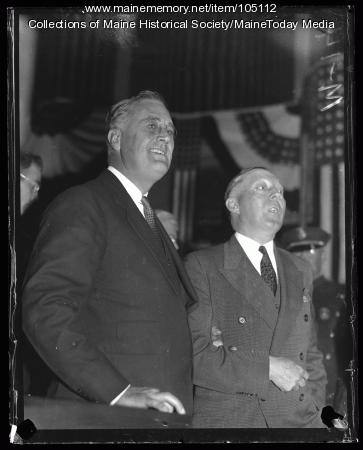 Before being elected President, candidate Franklin D. Roosevelt delivered a campaign address to the people of Maine on October 31, 1932.

In his address, he shared his plans to work harmoniously with other branches of government and across party lines. Maine’s Governor-Elect, Louis J. Brann was a fellow Democrat, and accompanied Roosevelt on his tour of Maine. Brann was newly-elected but not yet in office because, historically, Maine’s gubernatorial elections were held in September. “As Maine goes, so goes the nation” was a popular phrase in American politics in the 1930s, since Maine’s early gubernatorial elections often predicted party trends in the November national elections.

Roosevelt won the 1932 presidential election, although Maine was one of six states he did not carry (incumbent Herbert Hoover carried Maine by a 12% margin). Louis Brann served two terms as Maine’s governor, from 1932 to 1936. In the September 1936 election, Maine elected a Republican governor, and the Republican party dominated the state legislature. This was in complete contrast to the 1936 national election which went Democratic, and marked the end of the “As Maine goes” adage.