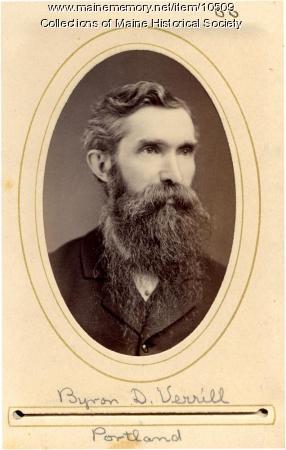 Byron D. Verrill, Maine State Legislature, 1880. "Portland. Republican, Christian, lawyer, married; age 44. Born in Greenwood, and educated in the common schools, at Norway Liberal Institute, at Oxford Normal Institute, and under the private tuition of Hon. Mark H. Dunnell. After fitting for college with the intention of entering a year in advance, his health broke down, and a year was spent in recreation. Was principal of the Norway Liberal Institute for eleven terms; read law with Charles B. Merrill, Howard & Strout, and Henry Ingalls. Was admitted to the bar in Lincoln county, and commenced practice in Portland in 1862. Time since has been wholly devoted to law practice, excepting the editing of the third and fourth editions of the Maine Civil Officer. Always a republican." -Biographical sketches of the members of the Senate and House of Representatives of Maine, v. ix. Augusta, Me. : Kennebec journal, 1880, compiled by Howard Owen.