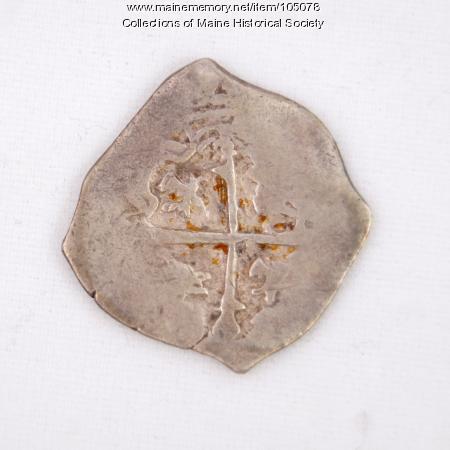 This Spanish Two Reales Cob coin was part of a cache found at the mouth of the Bagaduce River, indicating the area's thriving trade in the 1600s. The center decoration on both sides of the coin was probably part of a crest.

Present day Castine was a contested area of overlapping Wabanaki, English and French claims for centuries. In 1674, during a period of French control, Dutch privateers attacked the fort and took the Baron of Saint-Castin (Jean Vincent d’Abbadie) and others hostage for ransom. When Saint-Castin returned to Castine in 1677, he established a trading post among Wabanakis on the Bagaduce River, about six miles from the old fort.

In 1684 Chief Madockawando’s daughter, Pidianiske (baptized as Molly Mathilde), married Saint-Castin and solidified the alliance between the French and Penobscot. Family ties and reciprocal relations gave Saint-Castin a stronger footing among Wabanaki people than the English settlers and traders encroaching up the coast.

In 1840, the Grindle family found hundreds of coins buried on their farm. It is possible that this Two Reales Cob coin was part of a secret stash from Saint-Castin’s trading post.