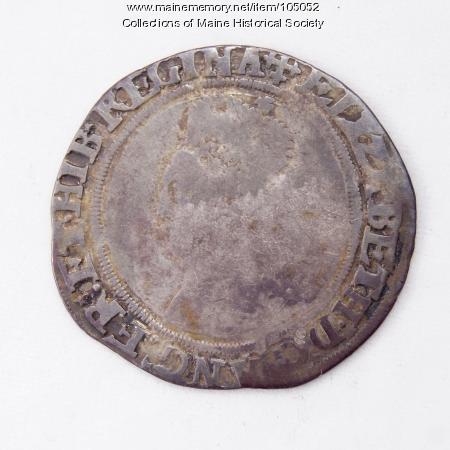 This shilling coin was part of the trove of gold and silver hidden by Walter Bagnall on Richmond Island. Bagnall was the first European settler on Richmond Island, near Cape Elizabeth, in 1628. He became wealthy by cheating the Wabanaki, specifically the female leader Warrabitta’s family, at his trading post. According to Massachusetts Governor Winthrop, "Bagnall...was a wicked fellow, and had much wronged the Indians."

Bagnall had violated his social responsibilities, and as a result, Warrabitta’s brother, Skitterygusset, killed Bagnall in 1631 and burned down the trading post. This act was a redistribution of power and asserted Wabanaki jurisdiction of the area. It is thought that Bagnall hoarded and buried money just before his murder. The number of coins and their international span demonstrates the far reaches of the fur trade in Maine.

The front of the coin once featured Queen Elizabeth I's crowned head, with the text "ELIZABETH.D.G.AN.FR.ET.HI.REGINA" (Elizabeth by the grace of God, Queen of England...) along the rim. The reverse depicted the shields of England and France and the words "POSUI DEVI ADIVTOREM," or "I have made God my helper."