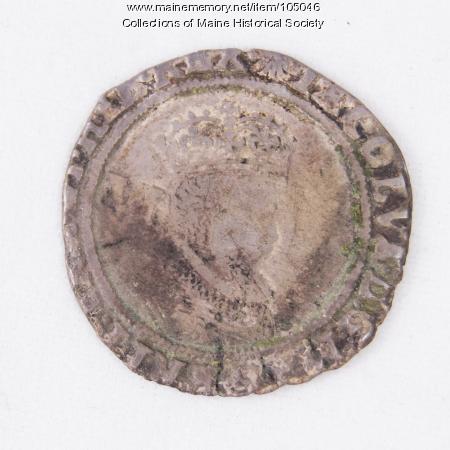 This coin, created during the reign of King James I, was part of a cache of gold and silver hidden by Walter Bagnall before his death in 1831. Bagnall was the first European settler on Richmond Island, near Cape Elizabeth, in 1628. He became wealthy by cheating the Wabanaki, specifically the female leader Warrabitta’s family, at his trading post. According to Massachusetts Governor Winthrop, "Bagnall...was a wicked fellow, and had much wronged the Indians."

The obverse of the sixpence coin shows King James' head, with the text "JACOBUS D.G. ANG. SCO.FRA.HIB.REX." along the rim. The reverse features a shield and the text "EXURGAT DEUS DISSIPENTUR INIMICI," or "let God arise and his enemies be scattered."