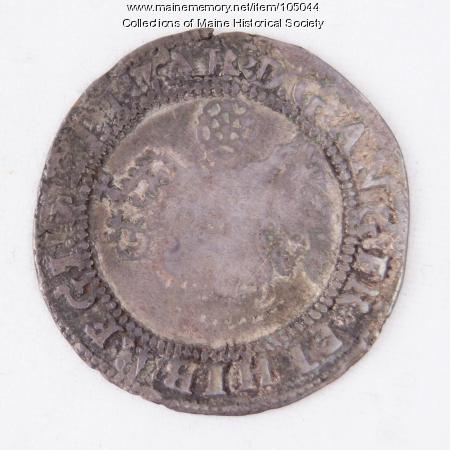 This English sixpence coin was hidden on Richmond Island by Walter Bagnall. Bagnall was the first European settler on Richmond Island, near Cape Elizabeth, in 1628. He became wealthy by cheating the Wabanaki, specifically the female leader Warrabitta’s family, at his trading post.

The front of the coin shows Queen Elizabeth's head, crowned, with rose behind her back. The text along the rim reads "ELIZBETH D.G. ANG. FR. ET HI. REGINA," or "Elizabeth by the Grace of God, Queen of England, France & Ireland." The text on the reverse of the coin is "Shield, 1590" and the motto "POSUI DEV. ADIVTOREM. MEV.," which translates as "I have made God my helper."