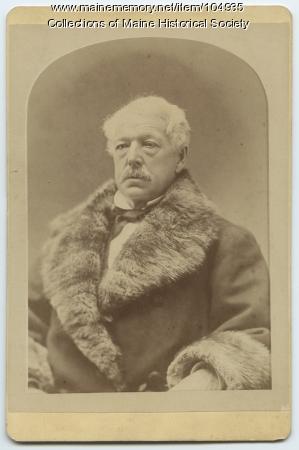 John Bundy Brown (1804-1881) began his career in the wholesale grocery business in Portland. His business later branched into sugar and molasses with the Portland Sugar Company, a very successful venture in which he involved his oldest son, Philip Henry Brown. The Portland Sugar Company suffered in the Great Fire of 1866, after which it never returned to its previous success. Brown turned his attention to his real estate and investment ventures, initially as Churchill, Browns & Mason, followed by the very successful Portland firm JB Brown & Sons.

Other ventures include railroads and hotels. After his death, he left behind a wealthy estate, of which his sons Philip Henry Brown and John Marshall Brown (the sons of JB Brown & Sons) were executors. Brown’s contributions to the architectural history of Portland included his home on the Western Promenade, Bramhall, and the JB Brown Block, and the construction of the Falmouth Hotel, all designed by his favorite architect, Charles Alexander of New York. The loss of his second son James Olcott Brown affected him deeply. He established the Brown memorial fund in James’ honor for excellence at Portland High School.