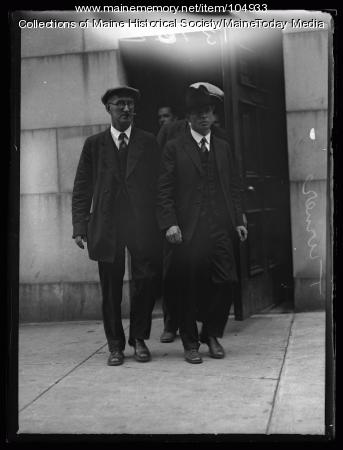 In September of 1926, Benjamin Turner of Iowa traveled from his place of former employment, Mexico City, to Portland for the sole reason of killing James Hallen. Hallen allegedly swindled Turner out of money. Witnesses say Turner arrive outside Hallen's house, where the two exchanged some words. Turner then unloaded his revolver into Hallen, killing him.

Turner did not run or attempt to fight when neighbors rushed to the aid of Mrs. Hallen. Turner said that there was no need to hold him, he wanted to be caught. He was taken to jail directly.

In this "Portland Evening Express" photograph, Turner is being escorted out of the municipal courtroom by Sheriff John J. McNeil.