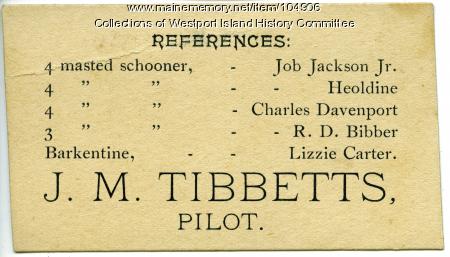 Originally from Boothbay, John Tibbetts and his wife, Sarah McKown Boucher Tibbetts (1840-1910), lived in Westport from 1881 to 1897. During the years he lived on Westport, he sailed mostly out of Bath and New York working for Frank A. Small and Joseph Varney of Bath, and Harry Anderson of Exeter, New Hampshire.

This business card came from a collection of papers found in the house where Capt. Tibbetts lived while on Westport and lists as his references the names of the schooners he worked on as Pilot. The card reads: