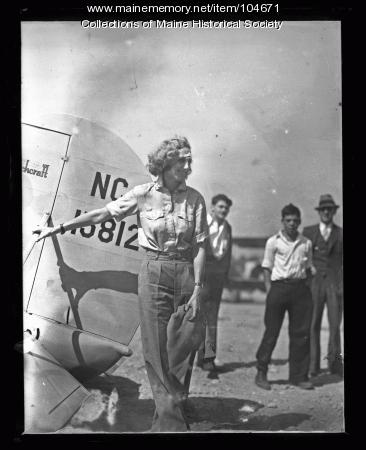 Beryl Markham was a famous aviator who was accredited for being the first woman to fly solo non-stop across the Atlantic Ocean from East to West, and the first person to fly solo from England to North America. This trip also sparked her to write a book about her adventure, called West with the Night.

This photograph was likely taken on September 1936, shortly after her transatlantic flight. The injury to her head was from a forced landing in Nova Scotia on September 5, 1936. The airplane next to Markham is a Beech Staggerwing C-17B, not the Percival Vega Gull she used for her transatlantic flight. The airplane in the photograph belonged to the O.J. Whitney Flying Service of New York.